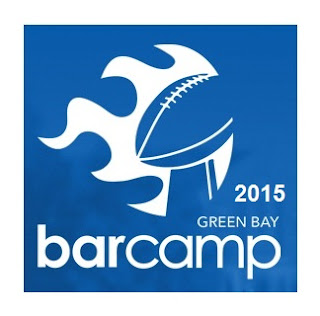 This is a brief and necessarily incomplete summary of what happened at BarCamp Green Bay on November 7, 2015, at Northeast Wisconsin Technical College’s Corporate Conference Center in Green Bay, Wisconsin, USA.

I say “necessarily incomplete” because so many interesting and worthwhile conversations and sessions happen at BarCamps that no one person can give a comprehensive summary of them all. What I’m presenting here is mainly conversations and sessions in which I participated, along with a few ideas I’m thinking about or developing for BarCamp Green Bay 2016 and other future unconferences.

If you aren’t familiar with BarCamp technology unconferences, you might want to read “BarCamp Green Bay: BarCamps Have Participants, Not Attendees” and “9 Reasons BarCamp Green Bay Is For Civic Hackers,” read the Wikipedia entry for BarCamps, or do a Google search for specific aspects of BarCamps that would be of interest to you.

There were 51 people who registered online for BarCamp Green Bay and a few BarCampers who didn’t register but were, nonetheless, welcome participants. As with most events, some registered people were unable to show up. We ended up with ~ 40 adult particpants. Eight to ten kids showed up for KidsCamp and appeared to enjoy the activities there. There were a few first-time BarCampers, but most were repeat Campers. Most repeaters had only been to Green Bay’s BarCamp, but some people had participated in BarCamp Fond du Lac, BarCamp Milwaukee or other midwest BarCamps.

The two main benefits of participating in a BarCamp are the interesting discussions, both during sessions and between sessions, and meeting new like-minded or complementary-minded people. We had four designated session locations and five session periods, each an hour long, so there were twenty potential slots for people to lead a session and for participants to choose from for learning and sharing info about topics of interest to them.

Other minor, but fun, benefits for participants were free BarCamp Green Bay 2015 shirts, event stickers, a little Omni Resources swag, and beverages and munchies throughout the day, including sub sandwiches for lunch and pizza for supper.

One of the frustrating aspects of a BarCamp is that although you have an opportunity to participate in many interesting sessions, there are always many more cool sessions which linear time prevents you from participating in. There ended up being nineteen sessions (I think), and if you led one session, you were only able to participate in four other sessions. This meant that you missed out on fun discussions at fourteen sessions!! Fortunately, if you heard about a session that sounded really fun, you could talk with the session leader or participants during meals or in the open time after supper. (Session grid picture below is missing session description sheets.)

The sessions I participated in were about serious games/gamefication, emotional intelligence (or EQ rather than IQ) in business relationships (see Six Seconds), the dev stack used for building the BarCamp Green Bay website. My final session, which I co-led, was about what would make a BarCamp more worthwhile and how to end up with 150 - 200 people participating in next year’s BarCamp.

One regret I have is that I didn't have enough time to do a session on civic hacking! There were people at BCGB 2015 who were interested in finding out more about civic hacking. I invited them to the November 17 civic hackers meetup at Bazil's Pub in Appleton or other future NE Wisconsin civic hacking events.

If other BarCamp Green Bay participants take the time to write up a short summary of the sessions in which they participated (please ;), I’ll add them to this post, with attribution…

As a result of the sessions I was in and the conversations I had outside of sessions, I’ve got at least fifty posts topics I want to write about related to BarCamp Green Bay 2016. I’ll probably publish most of the BCGB 2016 posts on the myDigitechnician blog rather than on DHMN Civic Hacks, since many of the BCGB posts will have minimal ties specifically to civic hacking. But I’ll also put links to those posts here on DHMN Civic Hacks in case civic hackers want to bounce over to the other blog to read the BCGB posts.

My thanks to Chris Jaure and the sponsors for making BCGB 2015 possible! Thanks also to Mathew Peterson and others who helped with shirts, supplies, and setup for the event. And a big 'thank you' to all the participants who spent a few hours or the whole day at the event, helping make it fun, interesting and worthwhile for the other BarCampers. I’m still thinking about ideas I heard and discussed at BCGB 2015.